Bigg Boss 3 famous and most lovable participants who had a huge fan base for her cuteness is Losliya. The recent heartbreaking news about her which bounced social media repeatedly is Losliya’s father’s demise. The fans are mourning the death of Mariyanesan on social media and sharing their condolence messages through various social media platforms. 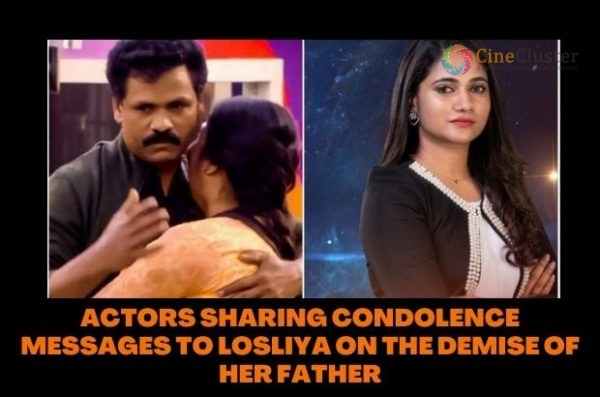 It is reported that Mariyanesan passed away on November 15 in Canada due to a heart attack. Also, the reports suggest that the body is yet to be brought back to Sri Lanka. Many actors have been sharing their messages to her, as a part of it.

The sensational participant Vanitha also shared her condolences. She wrote, ” Even sadder to hearing the news of #LosliyaMariyanesan. Cruel… I don’t know how they are handling this…. Especially since he was the breadwinner and 3 daughters… very heartbroken… life is too unpredictable…scary… I hope they can at least bring back his body at this time.”

Even sadder to hearing the news of #LosliyaMariyanesan .cruel…I don't know how they are handling this…especially being he was the breadwinner and 3 daughters…very heartbroken..life is too unpredictable…scary…I hope they can atleast bring back his body in this time

Cheran was like a father to her while the time of the show and also they shared a good rapport. Now Mariyanesan’s death has pushed the Tamil audience into a shock. It is reported that the process for bringing back Mariyanesan to Sri Lanka has been initiated. More updates are awaited. Stay tuned for more breaking updates.