Silambarasan is one of the most popular actors in the Kollywood industry. His recent upcoming movie is Eeswaran under the direction of Suseenthiran. The movie will be hitting the big screen on Pongal released in January 2021. This much-anticipated movie features Nidhhi Agerwal, Nandita Swetha, Bharathiraja in the important roles. Music is scored by S.Thaman. The multi-talented star is once again looking years younger in the flick’s promotional posters, with his amazing physical transformation. 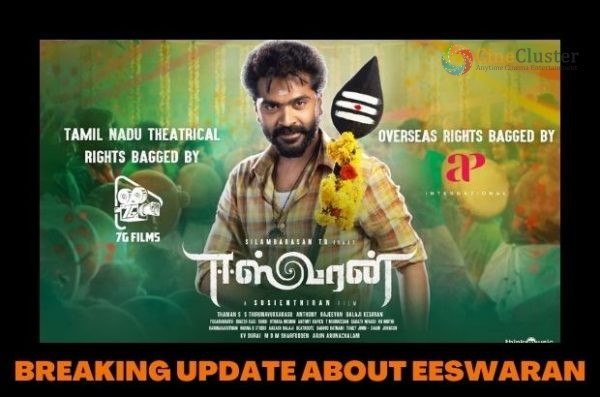 Now the makers of the movie have started their promotional posters with full fire. The movie was finished in a quick time of 45 days and looks to be a promising mass commercial movie. The makers of the movie shared a new announcement now coming in that the film’s Tamil Nadu theatrical rights being bagged by 7G Films and AP International securing the overseas rights.

Produced by KV Durai &MDM Sharfudden’s D Company banner. This movie has created a huge expectation among the audience  and also waiting for the day to witness the talent of Simbu in the big screen after a pretty much long gap. Stay tuned for more breaking updates.