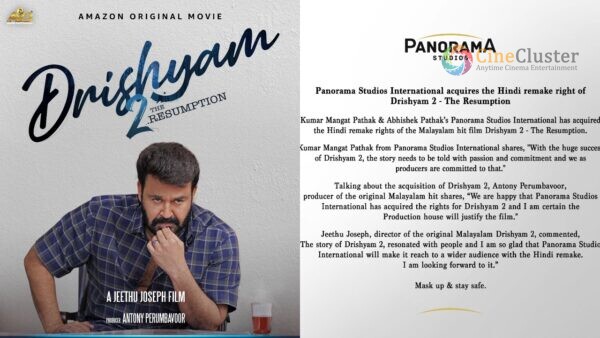 Drishyam 2 starred Mohan Lal, Meena, Ansiba Hassan, Esther Anil and the movie was directed by Jeethu Joseph. Drishyam 2 was released on the OTT platform on Amazon prime and had a positive response from the viewers and critics alike. Both, Drishyam and Drishyam 2 are sensational hits.

And now, Drishyam 2 is to be remade in Hindi and the remake rights were claimed by panorama studios. The director has written, “Kumar Mangat Pathak & Abhishek Pathak’s Panorama Studios International has acquired the Hindi remake rights of the Malayalam hit film, Drishyam 2 – The Resumption. Kumar Mangat Pathak, from Panorama Studios International shares, “With the huge success of Drishyam 2, the story needs to be told with passion and commitment and we as producers are committed to that”.

We are thrilled to announce that we have acquired the Hindi remake rights of #Drishyam2 – The Resumption.@KumarMangat @AbhishekPathakk pic.twitter.com/qWc37IH0rm

Talking about the acquisition of Drishyam 2, Antony Perumbavoor, producer of the original Malayalam hit shares, “We are happy that Panorama Studios International has acquired the rights for Drishyam 2 and I am certain the production house will justify the film.” Stay tuned for more breaking and exciting updates.