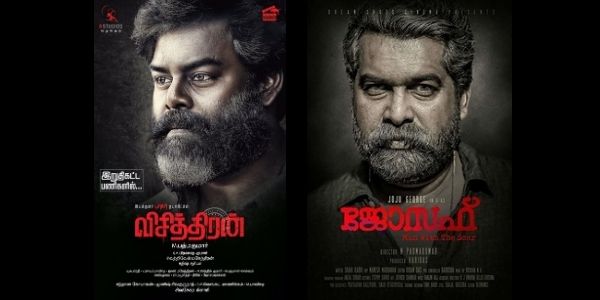 Vichithiram is an upcoming Tamil Movie that will be directed by M Padmakumar. This movie will be produced by director Bala under the scanner of B Studios in partnership with Shark 9 Pictures. The music score will be given by G.V.Prakash Kumar. Cinematography will be handled by Kayal and Sathish Suriya as the editor. Vichithiram will have Suresh in the lead role and Shamma Kasim, Madhu Shalini in the supporting roles.

The first look poster of the movie was released by actor Sivakarthikeyan on his official social media page. Vichithiram is an official Tamil remake of a Malayalam movie, Joseph that starred Joju George, Athmiya Rajana, Malavika Menon, and Dileesh Pothan in the prominent roles. The Malayalam version was directed by M.Padmakumar. Now entering into the nuances of the first look in the poster the hero Suresh portrays the character of a slightly aged person.

Suresh was last seen on Thaarai Thappattai, where he played a valiant role under the directorial of Bala. The short outline of the movie is, it revolves around the life of a retired police officer who unfortunately got struck into a criminal case involving organ gathering. The production process for the movie has been completed and now undergoes the post-production process. The movie might be released on the OTT platform. For more breaking updates stay tuned with us.