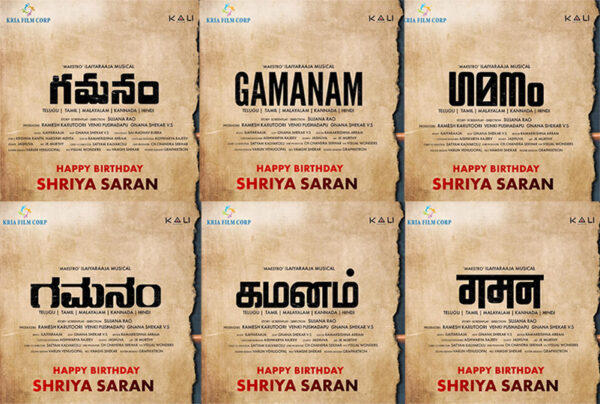 Shriya Saran Bhatnagar popularly known as Shriya is one of the popular actresses and also a model notable for her work in South Indian Cinema, Bollywood, and American cinema. She was last seen playing a crucial role in the movie titled Veera Bhoga Vasantha Rayalu which was released in 2018. Next to it, the Diva took a small break from acting, only giving special appearances in two movies. Now after a gap, she is back again to rock the industry. The movie she has taken part in is a multilingual movie. The title of this upcoming movie is Gamanam. The movie has been planned to release in Telugu, Tamil, Kannada, Malayalam, and Hindi languages, marking a Pan-Indian release.

As today is her 38th birthday the crew have released the first look poster of the movie which made her so enlighted. By seeing the poster it is clearly understood that she portrays the look of a dejected woman, in an intense and deglamorized saree avatar. It is expected to be an Urban social drama. This movie is an anthology of interconnected stories based on real-life incidents. In a way, Shriya’s character has different shades and she carried it off so well. This ravishing upcoming movie is directed by Sujana Rao and the music was scored by our Maestro Ilayaraja. As well Sai Madhav Burra will be penning the dialogues for the movie.

This movie is bankrolled by Gnana Shekar V.S in collaboration with Ramesh Karutoori and Venki Pushadapu. The rest of the cast and crew are yet to reveal. As per the information it is revealed that the entire shooting of the movie has been wrapped up and the post-production work is underway. Stay tuned for more exciting updates.