The most expected and anticipated movie in the Kollywood industry is Ka Pae Ranasingam. The movie features Vijay Sethupathy and Aishwarya Rajesh in the lead role. The movie is directed by Virumandi and the music scored by Ghibran. The lyrics are penned by Vairamuthu. The flick is produced by Kotapadi J Rajesh under the banner of KJR Studios. The movie will be released on the ZeePlex on October 2.

Recently the team also launched a method of Pay-per-view basis. In 2020 many movies have entered the OTT platforms by the way this movie is the first biggie movie that has been headed for the OTT release. So the method works on the process like, viewers have to pay Rs.199 by selecting the showtime. And also there are no restrictions on the number of viewers watching once. The viewers can see the movie by logging into the Zee5 app or by using the set-top-box.

Meanwhile, TNM approached Kotapadi J Rajesh to know about, what made him make this decision and also the responsibility for the audience on his idea of pay-per-view. His answer to the question was that the situation is unpredictable and it also doesn’t favor us. So he has to make up this decision as he also has 10 projects listed in his pipeline. So this move may help him to work stressless in his other upcoming projects.

Another notable point is all the people may not have Zee 5, Amazon Prime, or Netflix but for sure all may have a tv or set-top box in their home. So the plan is to indulge those crowds also to watch the movie which may help them in a bigger quantity. Now after resolving the queries raised about the pay-per-view news, the team has come up with a fantastic update to make the audience happy. The news is, the movie has received a U certificate. Now all the general audience can watch the movie with their family and can also enjoy it to the fullest on October 2. Stay connected for more breaking updates. 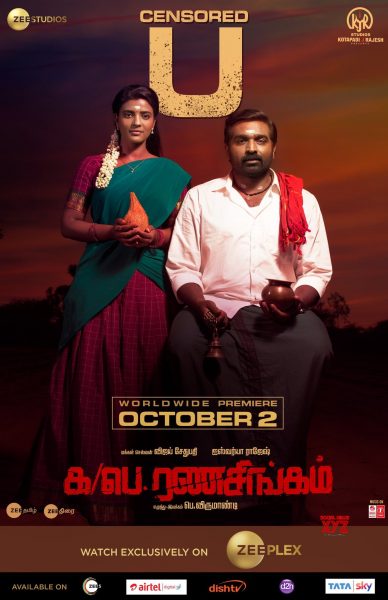