Sports movies always have a separate fan base in our Kollywood town. Now, the next upcoming sports movie in Tamil is Kalathil Santhippom. The movie will witness the friendship between two lead actors Jiiva and Arulnithi. The movie also features Priya Bhavani Shankar and Manjima Mohan as the female leads and Radha Ravi, Robo Shankar, Naren, Renuka, and Bala Saravanan in the key roles. 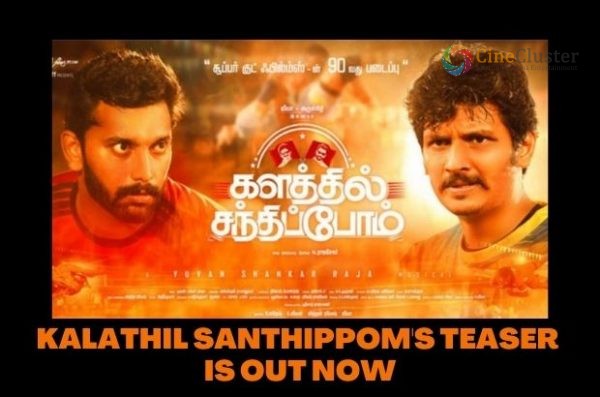 This movie is helmed by the ace director N.Rajasekar and is bankrolled by RB Chaudhury under the banner of Super Good Films. The technical crew includes, the dialogues are penned by R.Ashok, Pa.Vijay, and Viveka as the lyricist, Abinandhan Ramanujam as the cinematographer, Dinesh Ponraj as the editor and M.Murugan as the art director, and Yuvan Shankar Raja as the music director. With the production already completed, the makers have now released an intense and action-packed exhilarating teaser.

The teaser showed the scenes where both the actors are playing Kabbadi. The competitive side of both the actors is captured very well by the makers of Kalathil Santhippom. It is expected that the movie may have the toppings of action, drama, love, comedy, and twists to bring out the full main course to satisfy the audience of all age groups.

Here it's the most awaited electrifying #KalathilSandhippomTeaser

The movie revolves around a relationship between two friends in a theme of a pukka commercial entertainer. The movie was shot in Chennai, Thenkasi, and Karaikudi. Further official announcements are yet to receive. Stay tuned for more breaking updates.