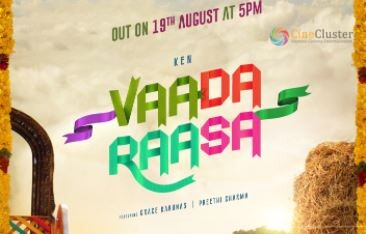 Karunaas’ son Ken is an upcoming talented actor in the Tamil cinema. He made his debut as an actor with Dhanush’s Asuran. Ken’s performance as Chidambaram in the movie was an impressive one and was widely appreciated by the critics and general audience. Now an exciting update has been revealed regarding his next release. The young actor is now all set to feature in a new music video titled Vaada Raasa.

The music video will also feature Ken’s mother, Grace Karunaas and actress Preethi Sharma (of Chithi 2, a serial in the sun tv) and it is touted to be a fun-filled folk dance video. The notable point of the video is that Ken will also be making his debut as a music director with this song. Ken has composed ‘Vaada Raasa’ along with Eshwar. The technical crew of the music video includes d by Venki, a former associate of director Lokesh Kanagaraj.

Sandy Master as a choreographer, Harish Kannan of Cobra fame as cinematographer. ‘Vaada Raasa’ song is produced by The Route, the makers of the viral hit numbers, ‘Kutty Pattas’ and ‘Asku Maaro’ and Sony Music. The song is helmed under the directorial venture of Venki, a former associate of director Lokesh Kanagaraj. The full video song of ‘Vaada Raasa’ will be released on YouTube on August 19, Thursday, evening at 5 PM.

This announcement has made the fans excited and look forward to the release. Stay tuned for more official updates.