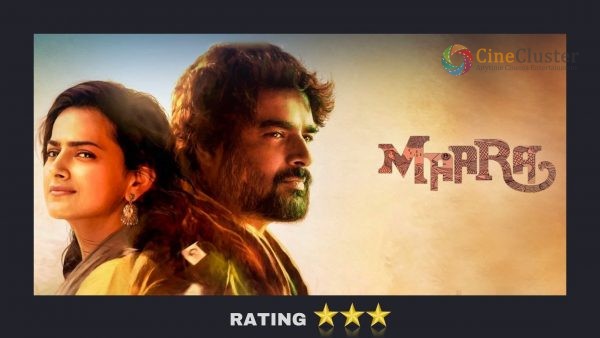 CAST:
Madhavan as Manimaaran (a) Maara
Shraddha Srinath as Parvathi (a) Paaru
Sshivdha as Kani
Mouli as Vellaiya
Alexander Babu as Thief

SYNOPSIS:
Paaru, an independent woman gets intrigued by the artworks on a wall illustrated by Maara and decides to track him down. What made her go head over heels for the illustration and what awaits them forms the crux of the story.

This film is adapted from the movie ‘CHARLIE’ released on 2015, starring Dulquer Salman and Parvathy. The colour theme for both Paaru and Maara has worked out perfectly. The resemblance of these characters and the parallelism was mastered by the team. The cast has done their job to perfection. The music makes you travel with the lives of the characters. Cinematography and frame references were brilliant. The director has given his best, to deliver the story’s emotion to the audience. All in all, a great effort by cast and crew.

Mesmerized by the tale told to her by a fellow passenger, Mary, in her young age, Paaru (Shraddha Srinath) grows up. To escape from her marriage, she reaches Kochi, where her attention is drawn to an illustration depicting the tale told to her. Astonished, Paaru decides to know the whereabouts of the illustrator, Maara (Madhavan). With the help of a thief (Alexander Babu), who happened to be friends with Maara, Paaru gets to know about Kani (Sshivdha), in whose life Maara had a huge impact. Maara took Kani to a beautiful place and introduces her to other people.

Paaru reaches that place where she gets introduced to Vellaiya (Mouli) who helped Maara during his childhood. Paaru is welcomed by Vellaiya with great hospitality and he shares his first and forever love story with Paaru, where he conveyed his love to his girl through a stage drama. He also shares a picture of her with Paaru.

Two days later, on Vellaiya’s birthday, Paaru returns and surprises him by bringing him the love of his life. Who is she? how did Paaru figure the person out? and how are the young couple – Maaran and Paaru destined to meet, form the climax part of the movie.