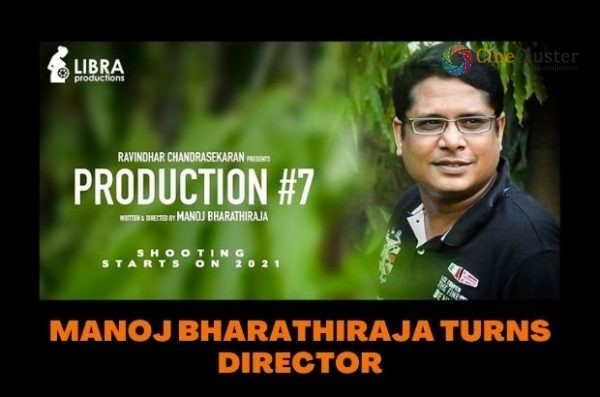 Acclaimed director Bharathiraja’s son is Manoj Bharathiraja. He made his acting debut in the year 1999 with the Taj Mahal directed by his father and the movie had music by A.R.Rahman. Later he was seen in a few movies like Samudhiram, Alli Arjuna, and Maha Nadigan. Now the latest buzz about him is, Manoj Bharathiraja is all set to make his directorial debut. This upcoming movie will be bankrolled by Ravindar Chandrasekaran under the banner of Libra Productions.

This happy news was officially confirmed by the producer. The production’s official page came up with a note on Twitter, ” Happy to share @LIBRAProduc Set to launch the #ProductionNo7 Directorial Debut of @manojkumarb_76 with blessings of @offBharathiraja Interesting & impressive details of cast and crew revealing soon. Shoot Starts & Release on 2021 @onlynikil @lightson_media.”

It is expected that the movie may commence the next year 2021 and will be released by the same year. The ravishing director also has another movie in his hand with Kamal Haasan. He will be directing the sequel of Kamal Haasan’s super hit psychological thriller Sigappu Rojakkal.

The makers are in the process of selecting the leading roles and the official update is expected to be made soon. They’re also a question related to the Sigappu Rojakkal movie that is, will the movie be the sequel of the Sigappu Rojakkal or it is a completely new film? The answer has to be revealed by the director. Stay tuned for more official announcements.