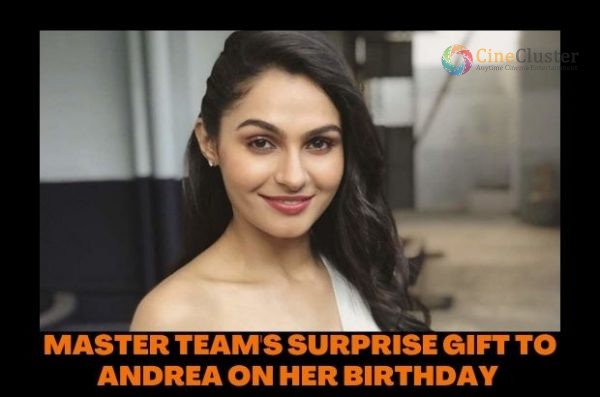 Andrea Jeremiah is one of the beautiful actresses and a sweet singer in the Kollywood industry. As today is her birthday she received a heartful of best wishes from various celebrities. The social media has been surfaced fully with heart-warming wishes from her fans and co-stars, friends, etc. Along with these happy moments another super exciting surprise was also added in this to enlighten her day even higher.

The makers of Master have released a special photo from the upcoming film, where Andrea can be seen sitting next to Vijay. In the photo, she was seen in a beige colored saree, while Vijay was seen in a blue shirt. It is to be noted that this is the first-ever photo of Andrea that the makers have officially released. Directed by Lokesh Kanagaraj, the flick has Thalapathi Vijay as the male lead, while Malavika Mohanan will be seen playing the leading lady.

In this upcoming movie, Vijay Sethupathi will be playing as the antagonist and Vijay will be playing the protagonist. The cast includes Shanthanu Bhakyaraj and Arjun Das in the key roles. The music is scored by Anirudh Ravichander. The teaser was a huge hit as it received millions of views in days after its release. Now as per the latest report the movie will be released on Pongal 2021. Stay tuned for more breaking updates.