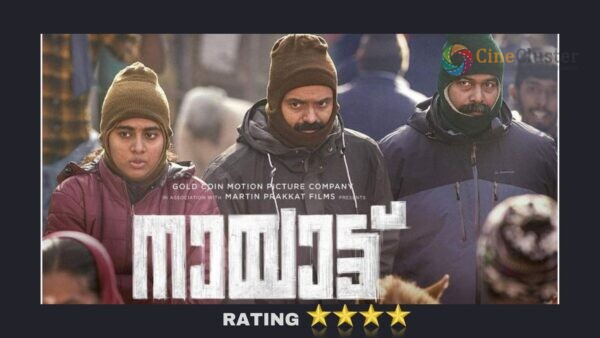 Three cops run for their lives after being dragged into in a tragic incident caused by a caste’s civilian occurring while nearing the state’s By-election period.

Praveen Michael (Kunchacko Boban) who joins as a CPO (Civilian Police Officer) new joinee in the station, who cares much about his mother and his family. Maniyan (Joju George) senior officer of 20 years experienced, Asst. Sub Inspector runs to earn only for his lovely daughter. Feels guilty of himself, not spending time with her mostly. And Sunitha Krishna (Nimisha Sajayan) who takes care of her lonely mother, struggles to build her house with a family member making troublesome with her. A complaint by Sunitha about her relative sets the plot and from thereafter all three policemen run for their life of an un-investigated crime.

The film is very raw. Opens up the system of corruption, which is not open enough with the people and the ones who has power dominates and kills the powerless ones. Director Martin Prakkat gets straight to the point and narrates widely of how the inside politics are taken place. An investigation leading from the accident that occurred after the late-night party attendance from Praveen, Maniyan and Sunitha, where 3 meets with an accident on a two-wheeler. Both Praveen and maniyan weren’t drunk instead Maniyan’s nephew not taken booze has drove the car to leave all 3 back home. The incident gets costly after knowing the boy fell down from the two-wheeler was dead when taken to the hospital and also, he was a friend of Sunitha’s complaint filed family member.

Gaining people’s trust is the base line of Martin’s script and he proves it with such strong screenplay. With politicians faking people and media to gain support and vote in the by-election, the story drastically brings out the true faces of the power community peoples cruel decisions in front of the audience. What really happens even from that 3 policemen 2 of them are also from the Dalit community.

Martin so cleverly portrayed how the same Sub- Inspector Maniyan handled a case earlier before the incident in the first 30 minutes of the film, where he follows orders to set up an innocent man for a crime. And at that point Maniyan says, “Even goons have a choice to accept or reject quotations, we don’t have that freedom”. That dialogue says it all in the later part of the film.

“Vote” – this is having the all the power to be spoken for. Because of the that time, the By-election period, knowing the value of their vote’s importance the particular community people miss use their freedom and goes colliding with the police officer who could not do nothing against them and still just to protect them from the given orders.

Martin Prakkat has calmly started his introduction phase of the characters at the beginning which makes the movie bit slower but still he leaves the logics and facts for the audience there, to believe it in the end that this is the real governance of the party. Later, the three policemen are accused to get arrested, they escape from the station and from there on, the film is an edge of a seat show.

With so many chasing shots the cinematography by Shyju Khalid was brilliant to see. Focussed on what to be shown in the chasing sequences and what kind of shots to be injected into the audience. Many night and early morning shots takes place in the film and showcasing of Munnar hills, looks to be captured comfortably by Shyju. Vishnu vijay’s music is the only tool helping the viewers to settle down from the story. Mahesh Narayanan and Rajesh Rajendran did the edit part in a well combined way.

Excellent writing from Shahi Kabir. Except the first 30 minutes the rest is a par excellence screenplay from Martin Prakkat. “Nayattu” available in Netflix (with subtitles) an all-language political display.