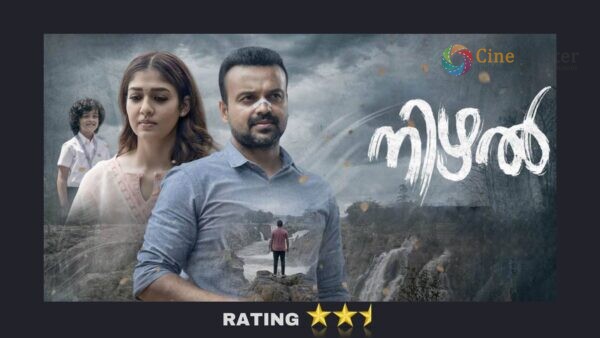 A Judicial Magistrate who comes across an 8-year-old Nithin’s killing stories that connects with the real-life incidents, makes him to explore and find answers. Do they have a real-life connection?

State award winning editor Appu N Bhattathiri’s directional debut is NIzhal. Rain was a metaphor used by the audience to understand the mental conflicts and inner thoughts of the protagonist. Nizhal, a different experiment. From the beginning to the end, the atmosphere of the film is full of mystery. The story starts with Judicial Magistrate John Baby (Kunchacko Boban), Nitin (Isin Hash) and Sharmila (Nayanthara). The turning point in the story is an eight – year – old Nithin tells strange stories to his teacher in the class and it comes to the attention of Shalini – a psychiatrist, friend of John Baby and from there on the stories revealed are true. Does it has a real life connection with the boy is Nizhal all about.

Exquisite visuals and innovative captivating background music helped to keep the mystery throughout the film. Cinematography is by Deepak D Menon and music is by Sooraj S Kurup. Rain is one of the common denominators in the film. Throughout the film, Rain is seen as a metaphor used to make the audience understand the mental conflicts and inner thoughts that the hero is facing. At the end of the film, this metaphor transforms from hero to heroine and can be said to be a director brilliance. S Sanjeev’s script stands out only at such places like this rather could not keep the thrill in the rest.

Lal, Saiju Kurup, Divya Prabha and Ronnie David played other important roles. Each of the characters performed well with their own performance. The shadow that tells the story in a slow pace, gives the audience a great thriller experience full of many twists and suspense but never really kicked up the suspense high. Brilliant plot ends with simple screenplay suspense.