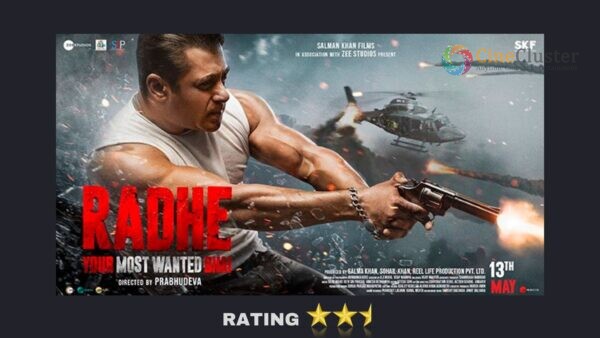 Radhe: Your Most Wanted Bhai

A suspended cop Radhe recalled for a clean-up mission in Mumbai city against a new drug mafia don Rana who kills the nation’s backbones by supplying drugs.

Radhe : Your Most Wanted Bhai is a remake of South Korean hit “The Outlaws”. Radhe (Salman Khan) a savage cop, been revoked from suspension for the city’s cleanup mission against a drug war which has spoiled the youngsters. Diya (Disha Patani) a working fashion model meets Radhe and falls for him. Rana (Randeep Hooda) Mumbai’s underworld don selling drugs, showing his brutal gender grievous actions against the city’s local dons and killing cops’ forces Radhe to stop him.

Prabhu Deva’s third clubbing with Salman Khan is Radhe. A usual commercial drama, which is also said to be a remake. Deva’s directional is no difference from his older ones. Commercializing the content is a known technique for Deva, and he made it beautifully. With Salman’s acting, a nothing special kind a say, maintaining his body appearance well and for his fans, Radhe is a complete masala.

With Diya (Disha Patani) playing the female lead, trying to match with the 55 age old star, it seems unnatural. Diya ooks very stylish and beautiful. However, his entry in the screenplay seems like a mere filling of the blanks. If the character of Diya is removed from the film, the entire film remains unaffected except for one scene. The romantic scenes between him and Disha in Radhe seem dramatic beyond the natural.

The screenplay is written by AC Mugil and Vijay Maurya and dialogues are also from Vijay. Radhe does not leave an impact due to poor writing. The film’s scenes are based on the stereotyped formulas of Hindi cinema. The dialogues seem extremely childish at some places. The comedy scenes between Salman and Jackie Shroff feel imposed. Jackie Shroff could have been better used in the film.

Rana’s (Randeep Hooda) vicious and ruthless drug mafia character is impressive in many scenes and is not lighted up anywhere in front of Salman. Gautam Gulati also appears in the role of Rana’s side kick and performed well.

Megha Akash and Bharath from the Kollywood are relegated to the background as young cops. At least Megha gets two scenes to make her presence felt but not many for Bharath, but keeping it apart Bharat has performed his role ecstatically even when he is at the background of the frame.

Music, the songs are visual treat to watch for but do not stay together for long. The helicopter scene of Climax could have been impressive, but turned out to be normal. Whatever it is, Salman Khan has completed the commitment to come on Eid. A onetime watchable family action drama.

(Radhe can be watched on ZeePlex, the pay per view service of Zee5)