SP Balasubramanyam was laid to rest at his Farmhouse at Thamaraipakkam Village in Thiruvallur district of Tamil Nadu at his family property after holding onto all the rites and rituals grandly. On Friday, Tamil Nadu Chief Minister Edappadi K Palaniswami ordered the legendary singer SPB to play full police force honors. Around two dozen armed reserve policemen from the Tamil Nadu were present in the ceremonial and paid their respects by firing three rounds almost 72 bullets into the air while his mortal remains were being lowered into the ground.

Director Bharathiraja, Vijay, Natarajan, TV anchor Mohan, State minister Mafoi Pandirajan and the music composer Devi Sri Prasad were also seen in the funeral among the crowded group. SP Charan is the son of SPB, he is a singer and actor. In today’s press meet which happened in the same place where SPB sir was laid to rest. When he spoke to the media people, he said,” Dad is now happy. He has recovered and is breathing well, here in Tharamarapakkam garden where is resting and will be rested forever.” 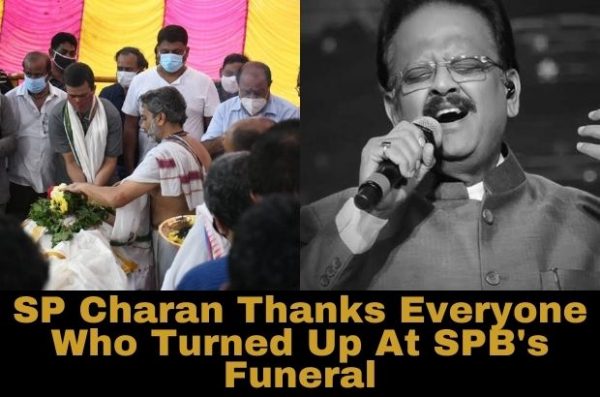 He also revealed a surprise plan to the audience and also to SPB’s loving fans. That is, he spoke about his plan to build a memorial for his father. SPB has always been there for the people and his music will also be owned by his fan lovers. He also stated that the memorial will be dedicated to all fans across the world. He also revealed an emotional statement, “For the first time I feel so grateful . For the past 50 days, you have been with my family, praying for my father’s recovery. My first and foremost thanks for you”.

He then thanked the Tamil Nadu government, Police department, Thamaraipakkam local body, friends, and residents of the area. Sharing that it has been overwhelming to see the number of people who turned up to pay their respects to his father at the funeral, Charan said, ” We have been celebrating him as our father but we didn’t know him as SPB. We didn’t know how big a personality he was.”

Further official announcements regarding the memorial house will be released in the coming days. Stay tuned for more breaking updates.