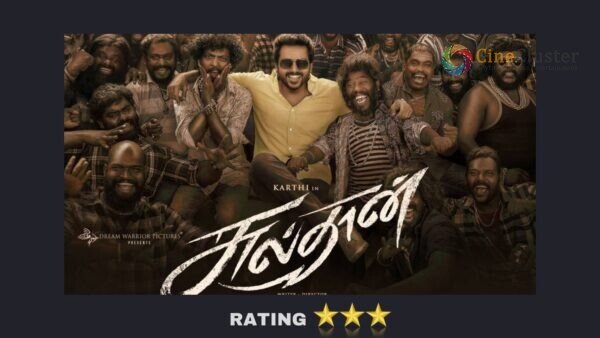 A young child (Vikram) is raised by set of brutal gangsters, later vikram(sulthan) tries to change them into good responsible citizen by utilizing the opportunity of an unknown village’s crisis.

The movie starts with such a Devarmagan effect where the protagonist’s father is a don for around 100 Big gangsters in a village. Hero Vikram also called as Sulthan (Karthi) is born around a time of a blood bath immense scene and loses his mother at the time of birth.  He’s then taken care of his father and his 100 gangsters’ brothers.

Mansoor (Lal) was on his epitome of acting, the energy has never gone down from him, makes you remember of his Sandakozhi rage performance still. Vikram-sulthan (Karthi’s) performance stood up to the story well. Karthi charms with his screen presence as always.

It’s his show throughout. Rashmika has nothing much to do. Personally, enjoyed the Bheem Boi kinda character. Wish he had much more to do.  Every other character played their respective roles well.

The movie sets its premise well in its first 30 mins, with karthi setting out to reform the gangsters who raised him, inadvertently landing in a village & ends up having to save them. The first half was entertaining leading to a goosebump pre-interval sequence. The second half starts well, with the situations leading karthi make all his gangster family take up farming, later becomes a bit inconsistent for the next 40 minutes, ending with a emotion filled raging climax.

The movie would have been crisper without the third villain. Technically the movie is strong, be its cinematography, songs and in Background scores, performances, well-choreographed action stunts. But story wise it fails to connect in reality. A pakka masala entertainment.