Thalapathy Vijay one of the most popular actors and also the man who has a massive hardcore of fan followers. One of the biggest actors in the Kollywood industry. His popularity in the field is always so high as the sky especially after the monstrous success of his recent release Master directed by Lokesh Kanagaraj. 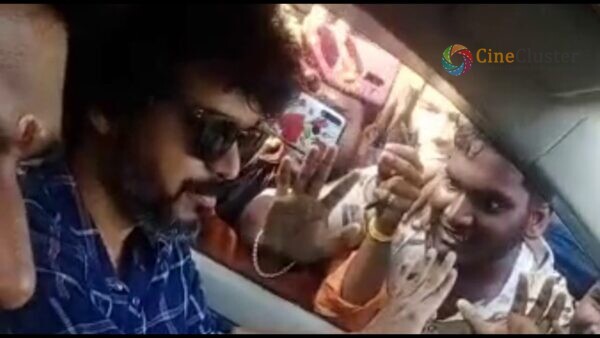 Master movie had a very good positive response among the audience. Vijay has yet again proved his talent and his popularity in the industry as Master has been declared as one of the biggest box office collections in his career. Following various records, this is another record added to the movie and also to his career.

Thalapathy Vijay will be next joining with the director Nelson for his 65th movie which has been tentatively titled Thalapathy 65. Produced by Sun Pictures. Master continues its race still in theatres and has also been subsequently streaming in Amazon Prime from January 29. Now surprising news has been waiting here to make you all happy. Yes!! Vijay made a surprise visit at his house in Panaiyur on the outskirts of Chennai.

According to the latest reports, the actor is meeting the office-bearers of the Vijay Makkal Iyakkam. The notable point is that this is his first open public appearance after the release of his Master. The official confirmation on the same has been awaited on the other side. With the speculations doing the rounds that it could be to discuss the body’s administrative functions.

Also, it is to be noted that Vijay had met the office bearers and members of VMI from Madurai, Trichy, and Kanyakumari in November 2020. Now his arrival at Panaiyur where the head office is based shows countless fans stopping by the actor’s car to catch a glimpse of him. Let’s wait for the official confirmation. Stay connected with us for more breaking updates.