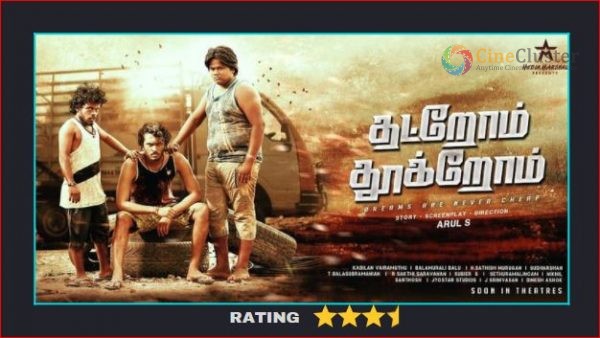 Three smart fellows who strives hard to attain their dream of becoming rich, falls prey onto a dirty politician’s hand and how deliberately the boys come ease out of it, is  Arul Suriakannu’s “Thatrom Thookrom”.

3 orphan fellows who works in a liquor shop, get dreams to become richer by going to foreign and they effortlessly earn their money very keenly and keep saving it. Teejay the man (protagonist), growing up in an orphanage along with his 2 friends later, make their living with Kali Venkat who works in the same bar selling bottles. The story gets pumped up soon, as the boys need to fetch some goods from Pondicherry, there the dirty political satire goons and the politician fits into the action and takes story to a non-pre-judgable climax.

I don’t want to reveal the story much yet, some scenes were pleasingly enough to watch, the small twists then and there and the climax screenplay turnover. As the films main political satires were the 2016 Indian Banknotes demonetisation but even though, it’s the first feature of Arul Suriakannu, it is still finding applauses and nominations from festivals like Toronto International Tamil Film Festival, DRUK Internaional Film Festival, Asian Film Festival and also Director Arul won the Best Debut FilmMaker of Feature Film Award at Port Blair International Film Festival.

What was the problem with the Teejay in the end? Did he recover from it? Has he gone abroad? Is the rest of the story of the film. Teejay, who played a Sagittarius’ eldest son in Asuran film, plays the protagonist in this film. He shines in acting on love, dance, and how to deal with problems. Those who come as friends have also done a better job of being given. Fouziee, who plays the heroine, has travelled together with the character to do dubsmash, falls in love with the teejay. Seenu Mohan, who is coming as a politician, is fascinated by experienced acting. Kali Venkat and Sampath are very helpful in the flow of the screenplay.

Director Arul has primely focused the film on helpless youth and money laundering. The director has done a fantastic job among the characters. The entertaining and lively screenplay is a plus for the film. As we come to speak about songs Balamurali Balu’s music are listenable. The song sung by Simbu in particular, sets the rhythm. The sound engineering in the film is bit noisy, which is not needed for the script and those “sounds” at times spoils the show’s essence. Dialogue’s from Kabilan Vairamuthu made weak impressions due to silly annoying non-reasonic dialogues. Satish Muruga’s cinematography is not very impressive but meets the scripts need.

Overall ‘Thatrom Thookrom’ is an impressive script and worth a watch in theatres, at this post pandemic scenarios.