Akshay Kumar has been roped in for an action drama. Ranjith M Tewari is the director of the movie. The movie will be produced by Pooja Entertainment under the association with Emmay Entertainment. The movie features Vaani Kapoor as the female lead along with Huma Qureshi, Lara Dutta, Thalaivasal Vijay in the prominent roles. The title of this upcoming action-drama is BELL BOTTOM. As per the reports, the story is set in the 1980s and Akshay Kumar will be portrayed as a spy agent in the movie. 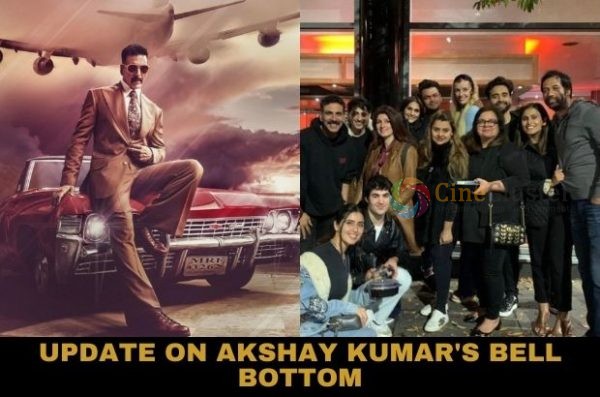 The shooting process of the movie has now entered the floors. The production process was started by adhering to all the rules and regulations laid down by the government and also by taking all the safety and precautions as an individual. The process underwent at Glasgow, Scotland. After staying in quarantine for completely 14 days along with the entire team they have now wrapped up again and started the process. The team next will fly to London to shoot the remaining shots in a closed and sustained environment.

This happy news was shared by Akshay Kumar on his twitter page with some pictures and captions, “so many happy faces in one frame.. that’s the result of a good schedule. Goodbye Glasgow, hello London #bellbottom @Vaaniofficial @ranjith_tiwari @jackybhagnani @honeybhagnani @poojafilms @emmayentertain”. By seeing this post Akshay Kumar fans are super excited and are eagerly waiting for the movie.

On seeing the work front of Akshay Kumar, he is also waiting for the release of LAXMI BOMB which will be released on Disney +hotstar platform on November 9 as a gift for the Diwali festival. This horror-comedy is directed by Raghava Lawerence which is an official remake of Kanchana. The movie stares at Kiara Advani in the female lead. His fans are eagerly waiting for the release of the Laxmmi bomb. Stay in touch for more amazing notifications regarding the movie.