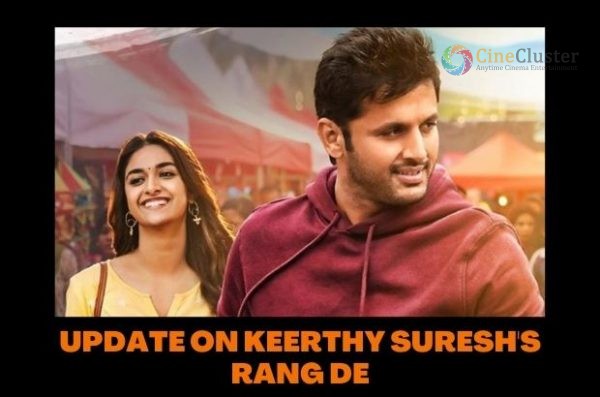 Keerthy Suresh, the national award winner and the most beautiful actress in the South Film Industry. She has many movies lined up on her list. One of them is Rang De. The movie features Nithiin and Keerthy Suresh in the leading role.

This movie is directed by Venky Atluri and produced by Suryadevara Naga Vamsi under the banner of Sithara Entertainments. The legendary cinematographer PC Sreeram has cranked the camera for the movie and Devi Sri Prasad has composed the music. The movie is scheduled to hit the screens on Sankranti 2021 in January.

Also, it is expected that the plans may have a change depending upon the scenarios of the ongoing pandemic. The makers have recently wrapped up a small schedule in Hyderabad and it happened as per the COVIS norms. The energetic composer is known for giving more rocking and jazzy songs as well as giving a pure melody to feel the essence of love.

The announcement has been made with the release of a new poster which looks quite romantic. The poster captures an intimate and lovable between Keerthy Suresh and Niithin. This poster has made the audience more exciting. Stay tuned for more official updates.