Vishal and Arya are currently working on an untitled movie in Tamil under the directorial of Anand Shankar. The movie is produced by Vinod Kumar under the banner of Mini Studios and has music scored by the current musical sensation Thaman S. Mirnalini Ravi plays the lead female role and acts opposite to Vishal’s lover. Vishal and Arya’s fans were very much happy about the project and are eagerly waiting for more official updates about the movie. 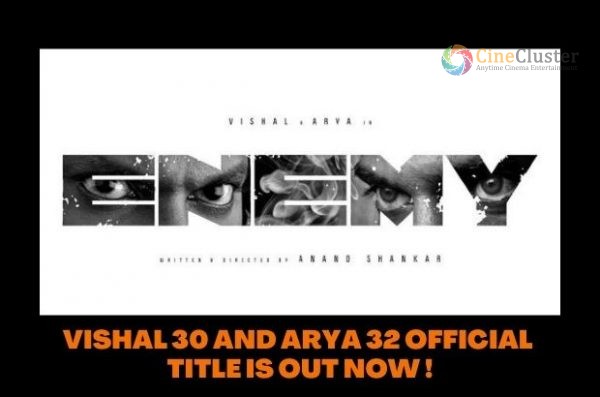 The movie was tentatively titled Vishal 30 & Arya 32. Now the most expected moment has arrived. The team has announced the official title of the movie. The movie has been titled, ENEMY. The title look of the poster was released by Vishal and Arya and it looks quite promising and striking. A tease of Arya and Vishal’s look in the movie is revealed through the title look poster. By sharing the title look, Vishal wrote on his Twitter page, ” It’s final. My best friend @arya_offl is now my “ENEMY”. We have no choice, expect to fight it out in a battle of epic proportion. Gonna be good. GB #ENEMY.”

The title look poster has been doing rounds on the internet. The title look also received a positive response among his fans. The technical crew includes, Rajasekar ISC as the cinematographer, Raymond Derrick Crasta as the editor, T.Ramalingam as the art director, Ravi Verma as the action director, the dialogues are penned by Shan Karuppusamy and Ramakrishnan.

The songs are penned by Arivu. The first schedule of this action thriller movie happened at Ramoji Film City in Hyderabad and the schedule was recently wrapped up. The next schedule plan is yet to be revealed. More official updates will be reaching us in the coming days. Stay tuned for more official updates.